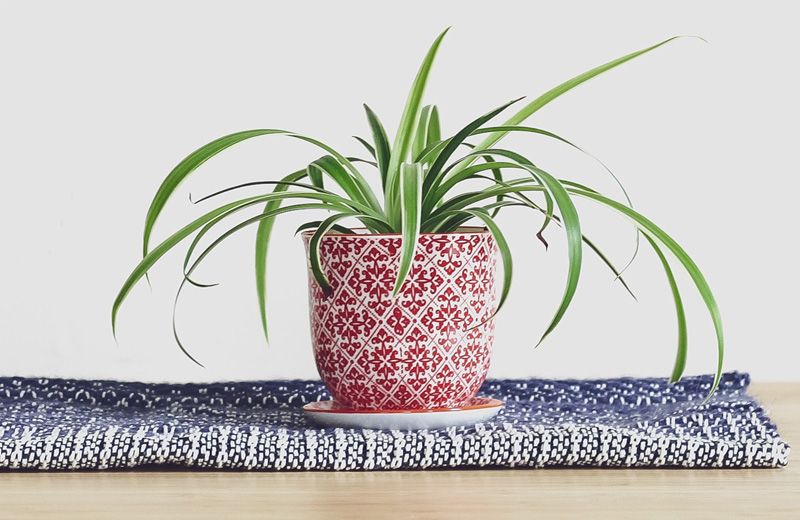 As a busy (read lazy and distracted) human, I used to think I couldn’t keep houseplants, even the drought tolerant ones. But then I discovered the plants on this list, all of which literally thrive on neglect. They’re the easiest houseplants to care for – you literally have to TRY to kill them.

So what qualifies a houseplant as low maintenance? Two things:

If I can stick a plant just about anywhere in my house and forget to water it for a couple of weeks without killing it, it qualifies as low maintenance. The plants on this list are just that. They may prefer a certain amount of light, but they’ll tolerate just about any conditions and they rarely need water.

So check out the photos and pick whichever ones look prettiest to you. You’ll be a crazy plant hoarder in no time. 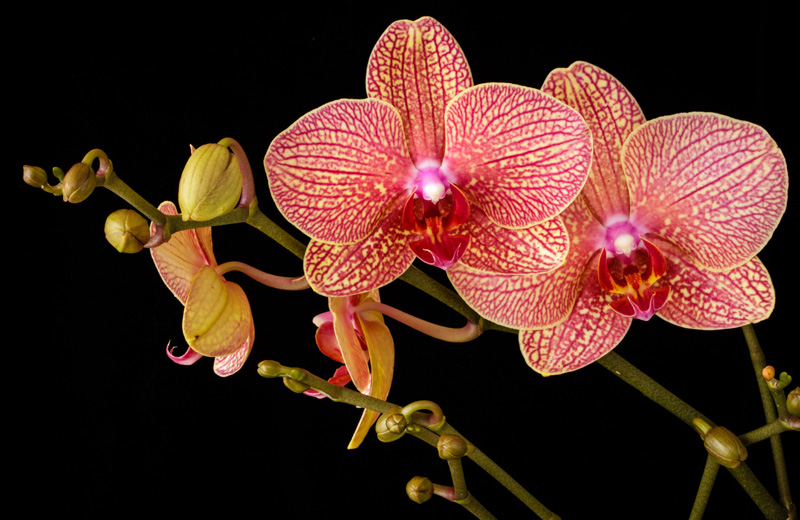 Orchids have a reputation for being difficult, but they’re actually some of the easiest houseplants to own if you know what you’re doing. And they’re one of the few flowering plants (oh, those flowers!) that’s easy to care for.

Just stick them in a sunny spot (they’ll tolerate lower light but won’t flower as much) and every 7-10 days, stick an ice cube in the pot to water and spritz them with some orchid food. That’s all you need to do to keep these little beauties happy.

But wait! You must understand that orchids don’t flower year-round. Like all flowering plants, their blooms eventually die. But they’ll grow new blooms if you’re patient! Lots of people think they’re dead when they drop their blooms, but they’re actually just gearing up for the next round of blooming. 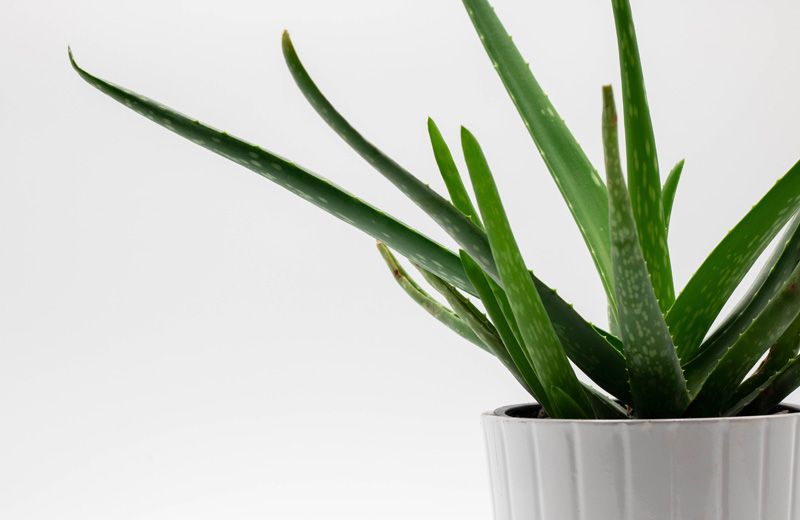 I’m pretty sure aloe is some kind of witch. You can accidentally leave it in a box in your dark garage for a year and it will still be alive (don’t ask how I know). You can also cut a chunk of it off and grow a whole new plant from it. You can even heal your wounds with it!

As long as it gets plenty of sun and not too much water, aloe will thrive. It’s one of those plants that you can forget to water for like a month and it’ll be fine. And if you happen to water it too much, it’ll just turn kind of a yucky brown color. Simply stop watering it when you notice that and it’ll perk back up in no time.

Bonus: Aloe is perfectly happy to stay in the same container for years. But if you do choose to repot it into a bigger pot (read our repotting guide here), it’ll quickly fill the new pot with tons of new growth. 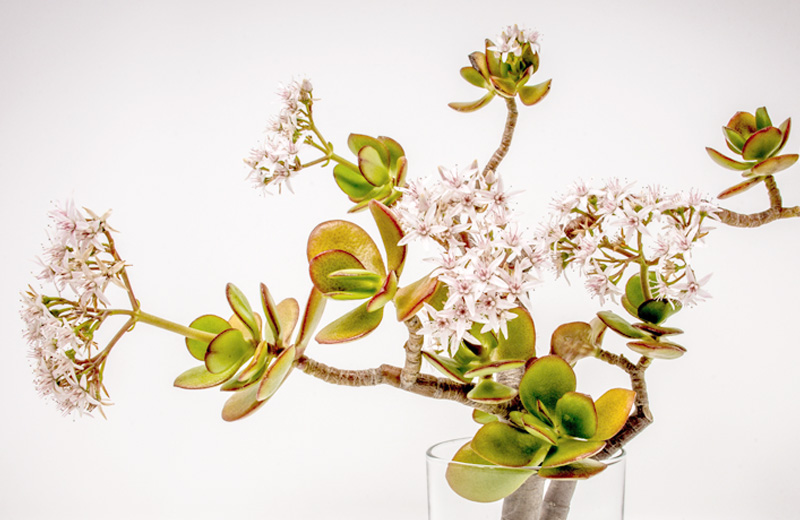 Thought to bring good luck, jade plants look like miniature trees (you can actually train them like bonsai) but are actually succulents. Thus, they like plenty of sun and not a lot of water. If you give jade plants too much water, they can get root rot (super common in houseplants). So just stick your finger in the dirt about once a week and see if it feels dry. If it does, water it. If not, leave it be (read our full guide to watering houseplants correctly here).

One of the coolest things about jade plants is that you can trim off a stem and stick it in some soil and it will grow a whole new plant. Woot! Free plants! Another cool thing is that jade plants can easily live for decades, so if you’re looking for a low maintenance houseplant you can eventually pass down to your grandchildren, this is it. 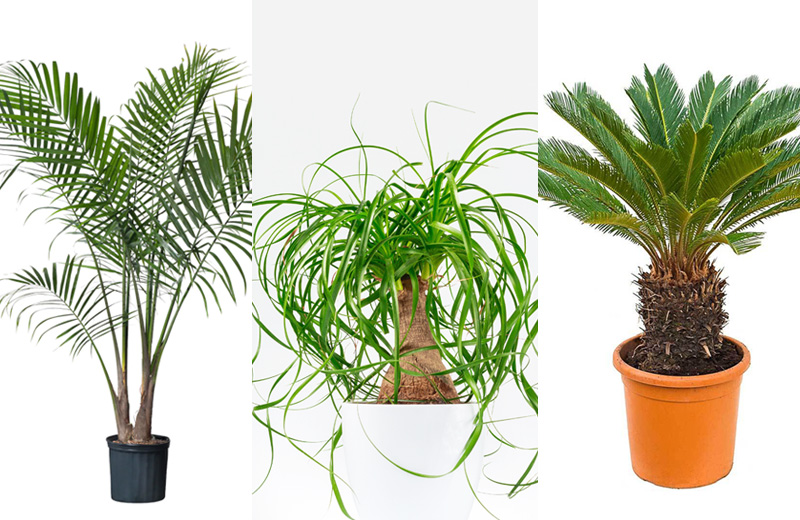 Palm trees are a reminder that there are warm, tropical places where everyone spends their days sipping Bahama Mamas on the beach. I want to go to there.

I really REALLY tried to narrow it down to just one super easy, low maintenance palm for this list, but I failed terribly. Instead, I’m going to cover THREE palm trees.

Majesty Palm – I’ve seen legions of majesty palms survive serious neglect in big box garden centers for YEARS. You may have to trim off a dead frond every now and then, but they will survive just about anything. They’re happiest with lots of light and fairly moist soil, but they don’t mind lower light levels or drying out every now and then. They’re slow growers, but they’re typically sold as 4-5 foot tall plants, so they’re perfect if you’re looking for something to fill a big, empty corner in your heart house.

Ponytail Palm – These beasts don’t give a crap about anything you can do to them. They will SURVIVE. Their fat trunks store water, so they can survive periods of drought no problem. They like bright light, but they’ll do just fine in lower light. Ponytail palms grow wild in places like Florida, reaching over 20 feet tall outdoors. But inside, they probably won’t reach more than three feet in height.

Sago Palm – These guys date back to prehistoric times (they’re actually older than dinosaurs), so they know how to survive pretty much anything. They can tolerate the brightest, hottest sun, but they’ll also do fine in medium to lower light. Water them about every two weeks (when the soil dries out) and trim any faded fronds. Just watch out, the fronds are a bit stabby. 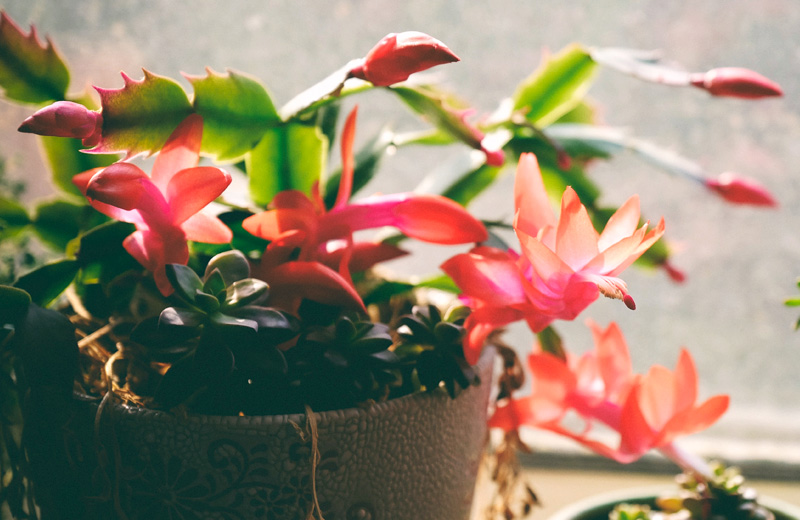 When you think of a cactus, you probably picture those tall boys with touchdown arms that grow in places like Arizona (they’re called saguaro). But Christmas cacti are nothing like that. They’re bushy little guys with trailing arms that produce bright pink or red flowers in early winter (Christmas time).

Being a cactus, they don’t need a ton of water. But they tend to need a bit more when flowering. They can handle low light, but they’ll produce more flowers in bright light. To get the most flowers, stick your Christmas cactus in a cooler area (50-55 degrees F) starting in November. You’ll see the buds start forming within a couple of weeks. 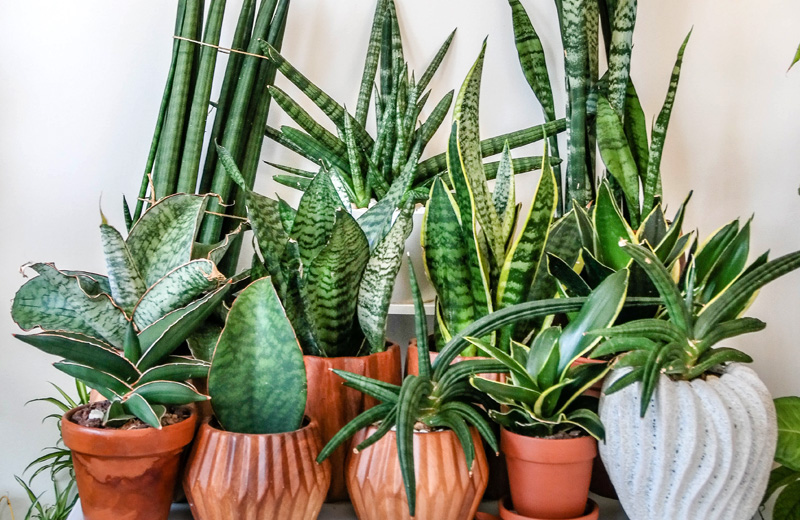 Aka mother-in-law’s tongue because it will cut you! Not really though. The leaves are spiky looking but not terribly sharp. They come in lots of different colors and patterns – the variegated ones are my favorite.

These are the quintessential low maintenance houseplants. No matter how much they’re abused or neglected, snake plants keep on keepin’ on. Although they love sunlight (especially the variegated types), you could probably leave a snake plant in a dark closet for a year and see no ill effects. Just water them a couple of times a month and they’ll live for decades. 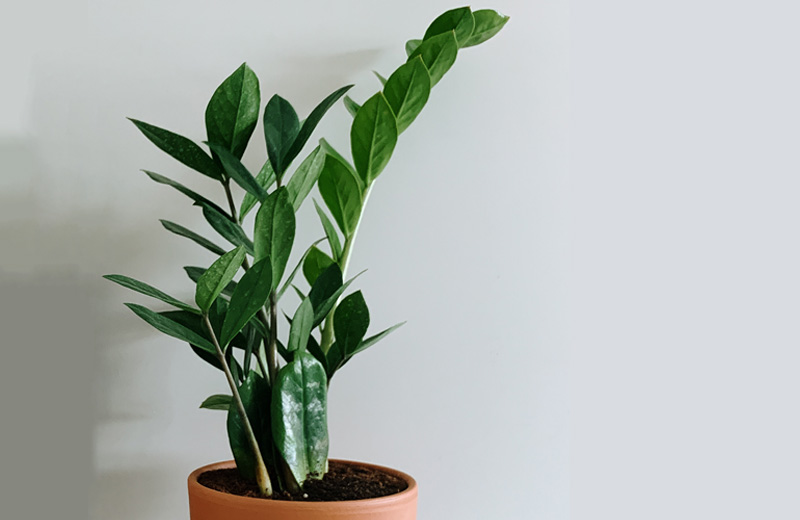 Did you know that the ZZ Plant is the official plant of the band ZZ Top? No? That’s because it’s not true. But it should be. No, it’s actually called “ZZ” plant because it’s botanical name, Zamiouculcus zamiifolia, is pretty much impossible for normal humans to say.

ZZ Plants are another one that likes lots of light, but are perfectly fine with darker areas. They store water in their stems, so it’s not a problem if you forget a watering here and there. Generally, you’ll want to water every couple of weeks though.

One of the great things about ZZ plants is that they pretty much always maintain their glossy, deep green color and dramatic shape, even in winter when lots of houseplants get crispy edges and sad profiles from the dry air. 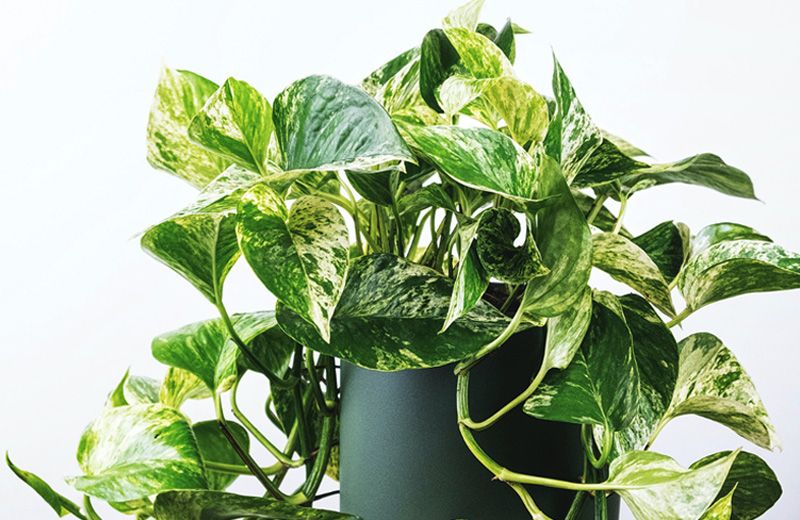 Pothos tolerates pretty much any type of light, even offices with just overhead lights. They like to dry out between waterings, so it’s better to under-water than over-water. There are tons of different varieties – dark green, neon green, white marbled, variegated, and more – so you should have no problem finding one you like.

The trailing vines can grow to be 20 feet long or more. You can keep it fuller at the base by pruning it (stick the clippings in water until they root to create new plants) or let the vines trail from a hanging basket or climb a moss pole. Pothos is probably the most versatile houseplant out there.

Spider plant, spider plant, does whatever a spider plant does. It makes tons of baby spiderettes, that’s what it does! You’ll see the little babies dangling off the ends of stems that spill over with the long, blade-like leaves of the plant. When you notice little roots growing from the spiderettes, cut them off and stick them in some dirt to grow a whole new spider plant. Woot, free plants yet again!

Spider plants look like little green (or variegated) fountains. They’re often grown in hanging baskets but are happy in whatever type of pot you have lying around. They’re part-sun, meaning they like a couple of hours of morning sun or indirect afternoon sun. But they’re fine in low light situations, too. Let them dry out between waterings (so you only need to water once every week or two) and they’ll be happy. 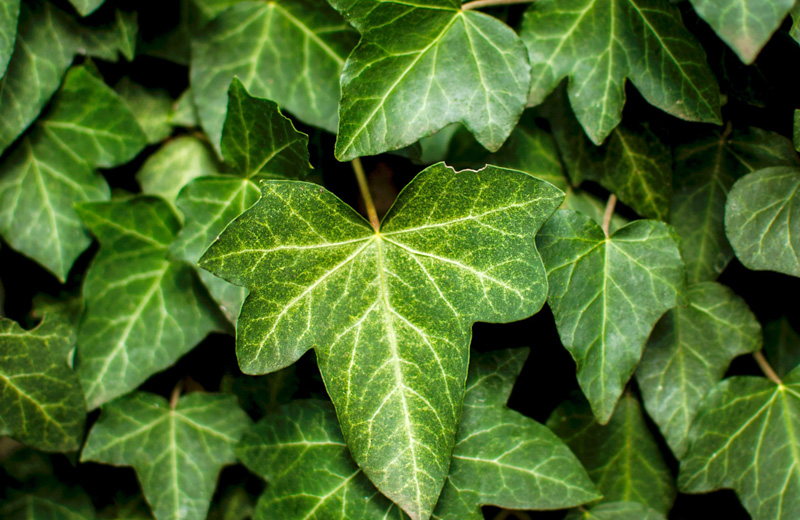 English ivy makes the perfect topping for english muffins. But not really because it’s toxic to humans and animals. So definitely don’t eat it. Also, don’t plant it in the ground because it’s super invasive. But it’s not all bad! English ivy is trendy, versatile and easy to care for in a pot or a hanging basket.

English ivy likes medium light but does fine in low light, too. Variegated varieties will maintain their color better with a bit more light. It prefers to be a bit on the dry side, so only water when the soil is dry to the touch.

This is another plant from which it’s easy to create new baby plants. Just trim a four to five inch piece from it, pop it in some water and wait for the little root hairs to form. Once you see a good number of them, plant it in some soil and voila, free plant! 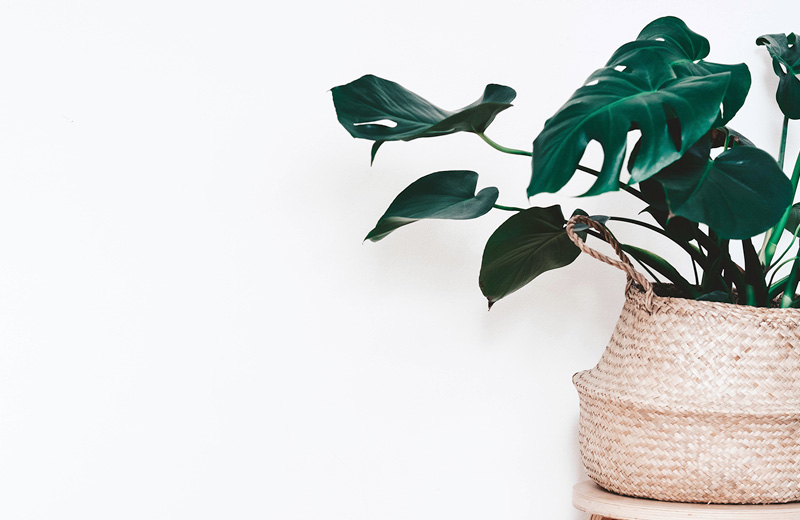 There are about a million different types of philodendron, but probably the most popular right now is Monstera deliciosa. If you’ve looked at an ikea catalog or any kind of home decor magazine, you’ve definitely seen it. But even if you’re not into monsteras, there are so many other varieties (neon green, red, yellow, trailing, upright, etc.) that you can definitely find one you like.

Philodendron plants like medium light or indirect sun. The more variegated the leaves are, the more light it will prefer. They’re drought tolerant and prefer being under watered to over watered. They do best in higher humidity, but don’t worry if your house isn’t a sauna. Just get a humidity tray.

Pro tip: Try picking up your plant to see if it needs water. If it feels heavy, it’s probably still wet and doesn’t need watering. Get familiar with its weight so you can easily tell when it needs water. 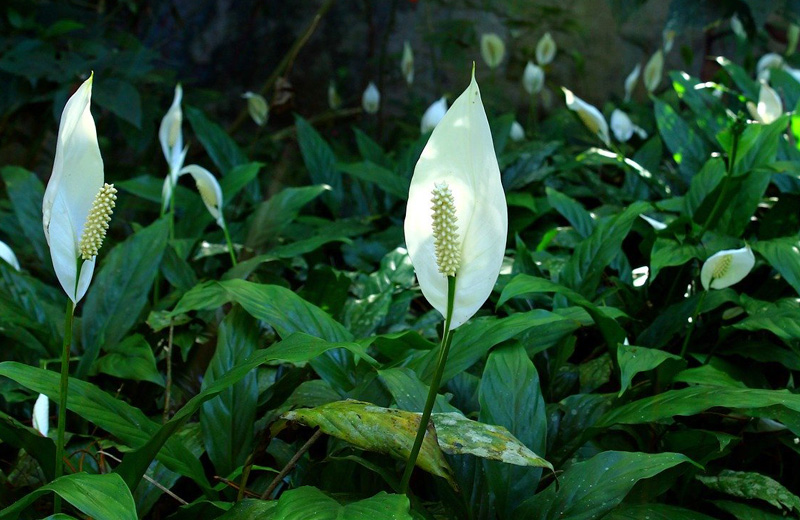 Peace lilies are one of the most popular low maintenance houseplants. They’ve got big, deep green leaves that provide excellent contrast to their large white “flowers” which are actually leaf-like structures called spathes. Makes for a really lush, dramatic plant.

Peace Lilies like low light and will even bloom in a windowless room under just fluorescent lights. They like warm, humid conditions, so just keep them away from drafts. They don’t need to be watered too often, and they’ll make it obvious when they’re thirsty by drooping dramatically. Don’t worry if you see it looking like that, though. They perk back up quickly after a deep watering. 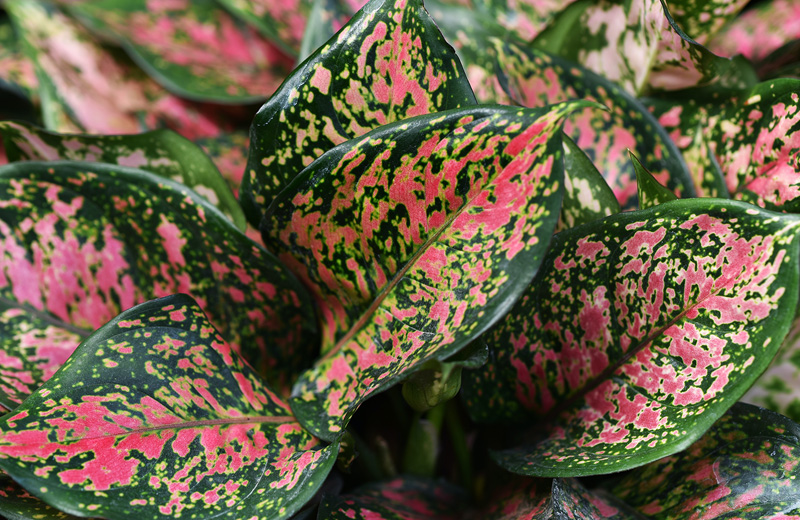 Aglaonema comes in a lot of different varieties, many of which have beautifully colorful leaves with interesting patterns that come in shades of green, pink, red, silver and cream. If they’re super happy, they’ll produce creamy white flowers nestled in the colorful leaf clusters.

Aglaonema is low maintenance because it will tolerate low, medium or bright light, as long as you keep it out of direct sunlight. It’s also drought tolerant and can go for as long as three or four weeks without needing water. It’s best to under-water rather than over-water, so let the soil dry out between waterings.