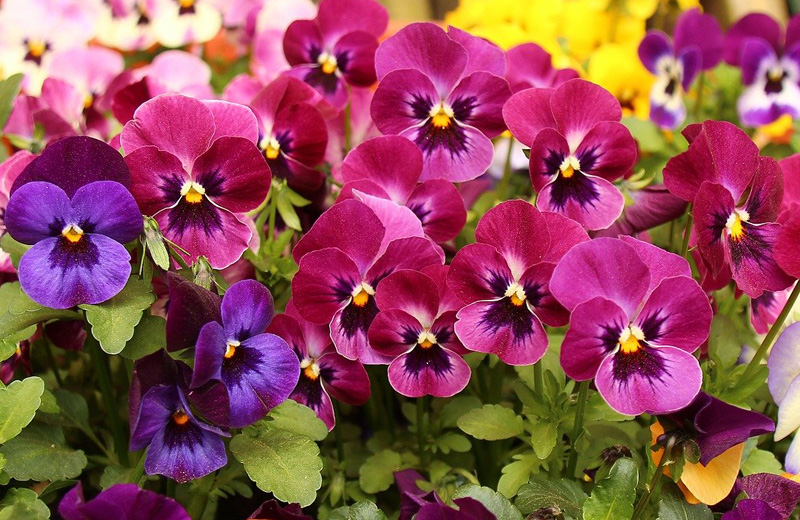 Ah, pansies. Those colorful, billowy blooms that look like chubby little faces. They’re often the only bit of color in winter landscapes, with their cheery little heads valiantly poking up out of the snow. Happy in hanging baskets, containers or flower beds and with hundreds of varieties available, pansies are a cool-weather favorite. Their flowers are even edible!

Cool Fact: Pansies were cultivated hundreds of years ago from a plant called heartsease, which was originally considered a weed. I think there’s a life lesson in there. 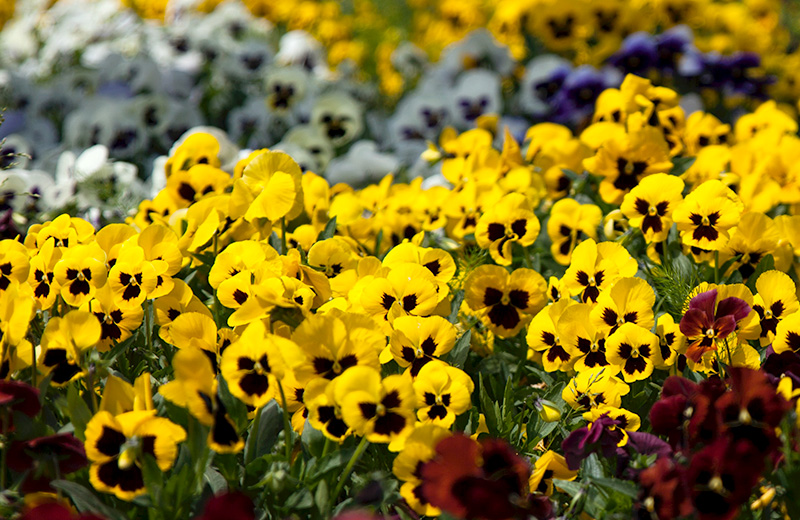 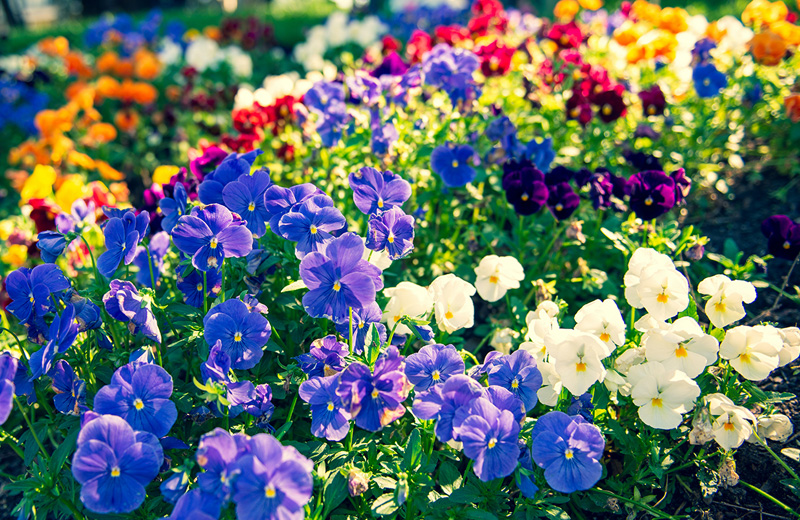 What don’t they look like? Pansies come in hundreds of varieties and a kaleidoscope of colors. From solids to bi- and tri-colors, you’ll find them in white, yellow, red, blue, orange, purple and even near black. Many varieties feature the traditional “face” or showy dark splotch that pansies have become known for.

Pansies grow up to nine inches tall with blooms that range from dainty little one-inch flowers (including violas) to showy four-inch blossoms. On average, the flowers are two to three inches in diameter.

Are Pansies Annual or Perennial Flowers?

It depends on the climate where you live. Pansies like cooler weather and can survive frost and even snow. Heat will kill a pansy faster than I can inhale a box of Cheez-Its (that’s super fast).

So, the short answer is that pansies are typically annuals.

The long answer is that in zones 4-8 (most of the U.S.), pansies are technically biennials, which means they have a two year growth cycle. The first year, they focus on growing foliage and creating a strong root base. In the second year, they bloom. Then they die. What a life.

BUT, if you’re buying pansies in a big box garden center or large nursery, you’re probably getting a selectively bred variety designed to bloom in the first year. So that would make them annuals.

If you live in very cold or very hot climates (like the Canadian border or southern Florida), pansies are most definitely annuals. So they’ll only last one growing season.

When Do Pansies Bloom?

You’ll see their colorful blooms everywhere from late fall through winter and into early spring. They’re often the only flowers you’ll see peeking out of snow-covered containers and flower beds. 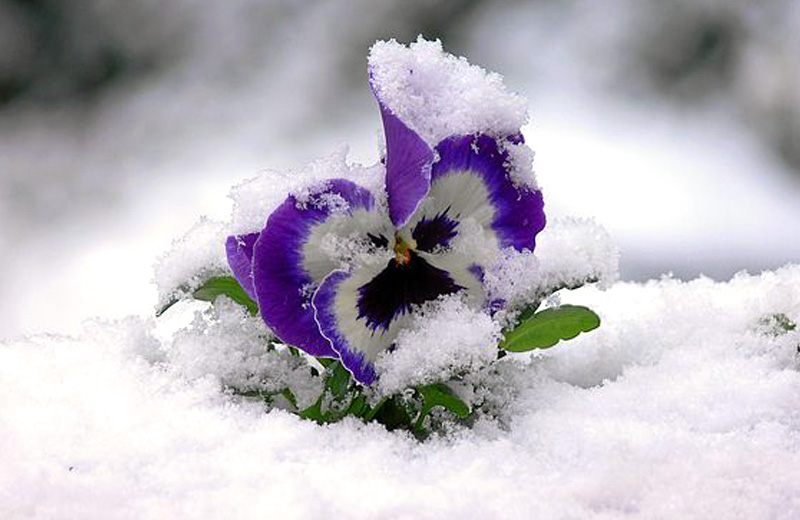 When Should You Plant Pansies?

Once again, it depends on your climate. Pansies prefer to be planted when soil temperatures are above freezing and below about 65 degrees. That means fall or spring in most areas.

So, for example, Wisconsin gardeners can plant pansies as early as August while Texas gardeners should wait until roughly October.

Planting in fall in a northern garden means your pansies will bloom all autumn, then take a break over winter and reappear in early spring with more colorful blooms. In southern gardens (typically zones 7 and up), they’ll bloom from fall all the way through winter and into spring.

No matter where you live, pansies will die out as summer heat arrives.

Can Pansies Survive a Frost?

Like those crazy polar bear club swimmers, a blast of cold simply invigorates them. Frosts and even freezes won’t do any harm to your pansies. However, prolonged freezing weather (such as in the northern U.S.) will damage your pansies unless you give them plenty of mulch. 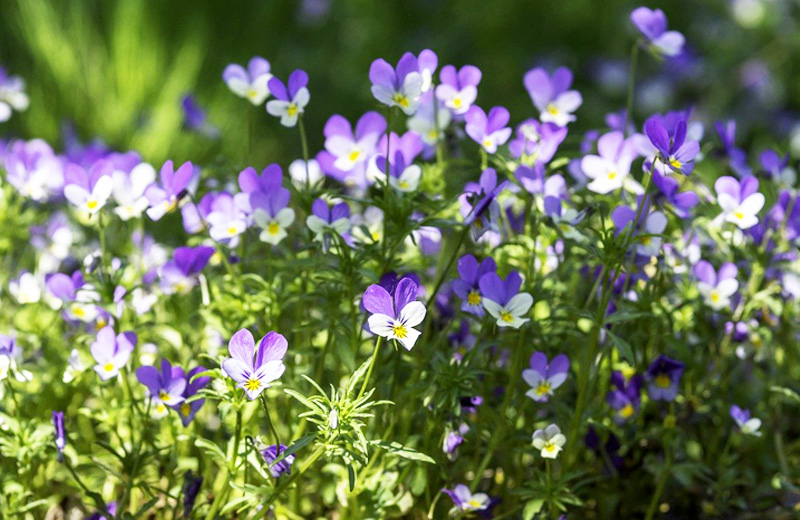 How Do You Choose a Good Pansy Plant?

When shopping for pansies, choose plants that are bushy rather than leggy, with plenty of buds. Plants with some open blooms are fine, but don’t buy plants that are full of open blooms because they’re typically stressed from being forced to work so hard in a tiny pot.

Where Should You Plant Pansies?

Pansies need sun to produce their blooms, but they don’t like heat. So the ideal site would get morning sun while being shaded from the heat of the afternoon sun.

Pansies like moist, but well-drained soil that’s high in organic matter. So for best results, you’ll want to amend your soil with something rich like compost, earthworm castings or chocolate cake (that last one is a joke – don’t put chocolate cake in your flower bed).

Or if you’re a lazy human like me, just use decent soil. Your pansies might not bloom quite as profusely, but dammit, these shows on my Netflix list aren’t going to watch themselves.

When planting pansies in the ground, space them 6 to 12 inches apart, depending on how quickly you want them to fill in. Stagger your rows to create a diamond pattern so they’ll fully fill in the area. You can set your plants out before digging holes to make sure they’re where you want them.

How Do You Grow Potted Pansies?

Pansies are super popular in containers and window boxes. They have the same requirements in a pot as they do in the ground, but since they don’t like soggy soil, be sure to use a high-quality potting mix and a pot with good drainage.

Planting pansies in portable containers means you can move them as the weather changes for maximum bloom time. Start them out in a shadier spot (partial sun) when it’s still warm, then gradually give them more and more sun as the weather cools. Just scoot that pot full of color around your patio as the season changes. 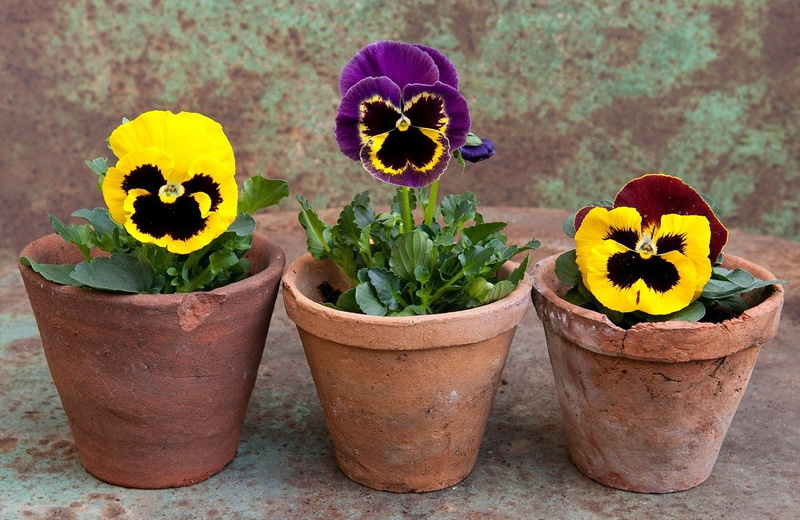 How Do You Care for Pansies?

There are four things all plants require: light, water, soil and food (fertilizer). Let’s go through each one for pansies.

If you’re in a colder area, give your pansies plenty of mulch before winter sets in to protect the roots from prolonged freezing temperatures. Pull the mulch back once the snow and ice begin to melt in spring. You’ll probably find pansy buds already forming.

Do You Deadhead Pansies?

To deadhead your pansies, hold the faded/dead bloom in one hand and then, with your other hand, cut it off at the bottom of the stem, near the base of the plant. That way you don’t have a bunch of headless stems sticking up out of your plant.

A sharp pair of pruning shears will make this easy, but if you don’t have any shears, you can just use your fingers to pinch the stem off.

How Can You Make Pansies Bloom More?

Making sure they get enough sun is your first priority. Too much shade will leave you with a bunch of green foliage and little to no blooms.

Deadheading is the next priority. Regularly removing faded or dead flowers will help the plant produce new flowers since they won’t be competing with old blooms for water or nutrients.

Finally, feeding your pansies with a bloom boosting fertilizer will help encourage them to bloom more.

Why Are My Pansies Dying?

The most common cause of untimely death in pansies is lack of water. So make sure you’re watering consistently, especially on warmer days.

Slugs can also cause problems for pansies, especially in shadier areas. Hand pick any slugs you see, then thin out the planting and try to water at the soil level (rather than over the leaves) so the area stays less damp.

You might also find aphids (little green bugs) attacking your pansies. If it’s a minor infestation, you can usually just spray them off with a strong blast from your hose. But since pansy blooms are a bit delicate, you may not want to explode their faces like that. Instead, you can spray the plants with Neem Oil once per day until the aphids are gone.

How Long Will Pansies Last?

In most areas, they’ll last until the weather starts to heat up in late spring/early summer. They typically don’t grow back the following year.

What Do Pansies Symbolize?

Obviously you wouldn’t give your elderly neighbor a red rose since it might imply that you’re in love with them (the horror!). So what does it mean if someone gives you pansies? It probably just means they’re a nice person who gave you a sweet gift.

But if you feel like searching for deeper meanings, you should know that the word “pansy” comes from the French word “pensée,” which means thinking or thoughts. Shakespeare used the pansy in a couple of his plays to signify thoughts or remembrance, but he’s ridiculously overrated, so who cares what he did?

Other, way better artists, like Vincent van Gogh, Georgia O’Keefe, William Wordsworth and even Elizabeth I used pansies in their art to symbolize everything from thinking of a loved one to turning inward and contemplating life itself. Pansies were also featured in Alice in Wonderland as part of the Meadow of Living Flowers (“We don’t want weeds in our bed”).

Another cool fact: Margaret Mitchell, author of Gone with the Wind, originally named the book’s heroine Pansy but changed it to Scarlett just before the book went to print.

So basically, pansies symbolize whatever the hell you want them to symbolize. We are all artists on this glorious day!

Is There a Video That Shows How to Plant Pansies?

Sure is, sugar lips. Here you go: